How to Become an Empowered Cancer Patient - Stand Up To Cancer

How to Become an Empowered Cancer Patient

Shannon Sylvain’s journey with colon cancer began with a doctor’s appointment for a sinus infection. A simple question from her primary care physician changed everything. “Is there anything else bothering you?” Her physician asked. Shannon believed her answer was nothing out of the ordinary. She told her that she had seen some blood in her stool, something that had occurred off and on for several years. Shannon attributed the blood to a poor diet and stress, information she had received from another doctor six or seven years prior.

Her physician was alarmed by the misinformation she’d been given and referred her to a gastroenterologist. When doctors recommended that she get a colonoscopy, Shannon hesitated. “I honestly thought nothing serious was wrong with me, and colonoscopies can be expensive if insurance doesn’t cover them,” Shannon says. “I decided to get the test done ultimately because my husband insisted.”

After her colonoscopy, Shannon went home and expected to hear good news in a week, after her gastroenterologist returned from vacation. She vividly remembers receiving an unexpected call on March 30, 2016. “When I picked up the phone and heard my doctor on the other line, my heart sank,” Shannon remembers. “It was the day after my test, and she was supposed to be leaving for vacation. I knew it wasn’t the good news I had hoped for.” Shannon’s colonoscopy revealed stage IV colon cancer. She was only 31 years old.

While her doctor explained the test results, Shannon listened in shock. She wasn’t even sure what colon cancer was, but her doctor sounded sad on the phone and wanted her to meet with a surgeon immediately. The next day Shannon and her husband met her surgeon for a consultation and scheduled surgery for April 20th. Everything moved quickly. “Initially, I didn’t have time to process what was going on or do research,” Shannon says. “I didn’t know what questions to ask and just did everything they told me to do.” 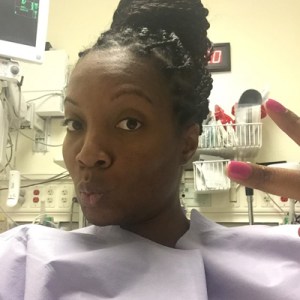 During her treatment and recovery, Shannon began doing her own research to educate herself about colon cancer. She was surprised to learn how much the African American community was affected by this often-preventable disease. One doctor she spoke to attributed the community’s higher incidence rate to lack of access to financial resources and good doctors. According to the American Cancer Society, African American men and women have the highest colorectal cancer incidence and mortality rates in the United States.

Shannon decided it was time to do something to help her community and all races get educated about colon cancer and prevention. “We’re taught to think colon cancer is an old person’s disease, but more and more young people of all races are getting diagnosed every day,” Shannon says. “When I was diagnosed, I wanted to know why I wasn’t more aware of prevention and warning signs, so I started Brown Sugar Rehab to help educate people about this disease, and to provide financial assistance for screenings and prevention.”

Shannon’s personal decision to become educated about her disease and make healthy changes to her lifestyle, including cutting out sugar and eating a plant based diet, has helped her immensely. After surgery, two months of radiation and six months of chemotherapy, Shannon was pronounced cancer free. Unfortunately, tests later confirmed that cancer had spread to her liver in April of 2017. This obstacle in her cancer journey is one Shannon is determined to overcome. 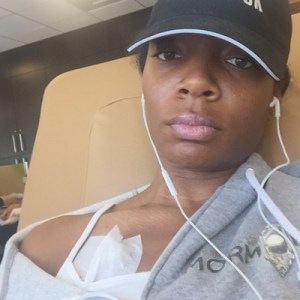 “If I didn’t tell you I had cancer, you’d never know it,” Shannon says. “I honestly believe my diet and exercise have helped me immensely in my fight against cancer.” Her spirituality, knowledge of treatment options and her supportive family contributed to turning her once fear-based decisions into informed and empowered ones. Making empowered decisions is something she also hopes to help other patients do.

Her advice to anyone facing cancer is to learn more about your disease and treatment options. Having a support team or loved ones to help do research is also key. “Last year I spent so much time making fear-based decisions because I didn’t know that I had options.” Shannon says, “Today, I feel empowered because I better understand my cancer, my treatment options, and my overall health.”

Through her organization, and by sharing her story with others, Shannon hopes that she can help save lives by spreading awareness of the importance of prevention. “If we can start having conversations with our doctors, family, and friends, and be educated about the disease, more lives will be saved,” Shannon says. When asked who she Stands Up To Cancer for, Shannon tells the story about a young lady named Keisha. At 24, Keisha, a member of Shannon’s church, died from colon cancer. At the time, Shannon thought colon cancer was just a rare disease that only a few people suffered from. “I stand up for myself, and I stand up for Keisha.” Shannon continues, “I want to see a world where more people like us have the opportunity and the resources to survive.”