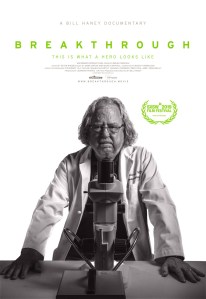 He has long hair, jams with Willie Nelson, and is a tireless innovator in the fight against cancer. Now he’s the subject of a major Hollywood documentary.

Nobel Laureate Jim Allison — leader of the Stand Up To Cancer-Cancer Research Institute (CRI) Cancer Immunology Dream Team — gets the star treatment in Jim Allison: Breakthrough which delves into Allison’s remarkable life and reveals why he’s committed to do whatever it takes to help more patients become long-term survivors.

Directed by award-winning filmmaker and sustainability entrepreneur Bill Haney, and narrated by actor Woody Harrelson, the film launched its theatrical run in major U.S. cities including New York, Los Angeles, San Francisco, and Houston. It has been earning rave reviews since its debut at SXSW this spring and is set to be distributed in over 100 theaters across 50 U.S. cities this fall.