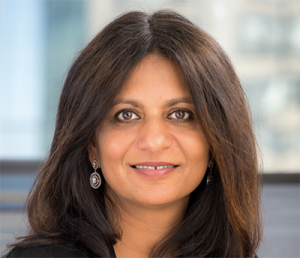 In 1974, Sapna Syngal’s parents made a huge decision to leave their native India and immigrate to Canada, dreaming of greater opportunities and a better life for Sapna and her younger sister.

“It was almost like a family decision, but it was the right one,” says Syngal, who thrived in her new surroundings. She was accepted into medical school at McGill University in Montreal at the age of 18. After graduating at age 24, Syngal set her sights on the U.S., where she received her MPH from the Harvard School of Public Health and completed a research fellowship at the Harvard Education Program in Cancer Prevention.

“I had a very direct and focused plan,” says Syngal of her career progression. “I wanted to take care of people and have a positive impact on the world.”

Today, Syngal is director of research in Dana-Farber’s Center for Cancer Genetics and Prevention in Boston, MA, and is a Principal Investigator on the Stand Up To Cancer-Lustgarten Foundation Pancreatic Cancer Interception Dream Team.

“It’s fabulous,” says Syngal. “Stand Up is very innovative. I love their approach of bringing together these teams of phenomenal scientists and letting them do their thing, but with clear metrics and objectives. It’s a good combination.”

The Dream Team is conducting a national study called GENERATE aimed at healthy people who have a family member who has been diagnosed with pancreatic cancer. “The goal is to teach these individuals about their risk of pancreatic cancer, learn about genetic testing and the benefits, and get them through the genetic testing process,” explained Syngal. “It involves a simple blood test, and if we find out participants carry a gene mutation, we help them get enrolled into prevention protocols with the goal of preventing pancreatic cancer.”

With such an ambitious and busy professional life, how does this mother of three daughters — her youngest is just starting college this year — relax and recharge?

“It’s really something I have to work on every day,” says Syngal, who credits a trip to the renowned Kripalu Center for Yoga & Health in the Berkshires 15 years ago as a life-changing experience. “I drove up there for one weekend and I was hooked.” Now her yoga, meditation and creative journaling practice help keep her grounded.

“To me, it’s very fundamental as a way of centering myself.”

Syngal’s discovery of the joys of yin (surrender) yoga, which involves just a few basic poses, lying on comfortable pillows and deep breathing, has enabled her to relax and recharge after especially tough days.

“The basic principle is rest and surrender, which can have a lot of value,” says Syngal. “Maybe the biggest challenge in my life is to feel like resting is OK, but that’s a total work in progress for me.”

Educating the public about cancer prevention is another work in progress for Syngal. In order to more effectively achieve that goal, Syngal is making another dream come true.

“I’ve always wanted to write a book and be a writer,” says Syngal, who’s fulfilling that dream by working on a book about cancer and genetics, which will feature patient’s stories related to her clinical work. One day, she hopes to take a crack at creative writing.

“I’d love to write a novel one day, but first things first,” she says.

Given all her past success and with such lofty ambitions for the future, it seems only fitting that her first name, Sapna, in Hindi literally means “dream.”

You can learn more about GENERATE at generatestudy.org.