MasterCard Extends ‘Dig In & Do Good’ Campaign Benefiting SU2C! - Stand Up To Cancer 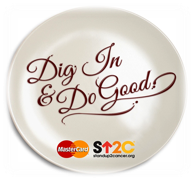 PURCHASE, N.Y., October 28, 2013 — MasterCard announced during the World Series that the company will extend their Dig In & Do Good campaign through the holiday season with the goal of raising an additional $4 million for Stand Up To Cancer® (SU2C). Through the program, MasterCard will continue to make a one cent donation to SU2C when cardholders spend $10 or more for a meal using their MasterCard through December 31, 2013 up to $4 million (U.S.). The program engages consumers to help drive necessary funding for innovative cancer research through their already planned activity simply by making the choice to use their MasterCard to pay for their meal.

MasterCard presented the $4 million fundraising contribution from the first portion of the campaign to SU2C on-field during last evening’s Game 4 of the 2013 World Series, which continues tonight on FOX. MasterCard and SU2C representatives were joined on-field by celebrity ambassador and Emmy award winner Eric Stonestreet. Stonestreet, known for his role as Cameron Tucker on the ABC comedy Modern Family,  is featured in a public awareness spot to help further consumer awareness and engagement in the effort.

“We’re setting the bar high in driving funding for innovative cancer research with the goal of bringing our total contribution to date for Stand Up To Cancer to $20 million by the end of 2013,” said MasterCard Group Executive of U.S. Market Development Craig Vosburg. “A lofty goal that we know we can accomplish with the help of our cardholders, issuers and merchant partners who have already proven their generosity and commitment to this cause.”

“The Dig In & Do Good program proves that when we come together – companies, consumers and ambassadors – we can make an impact against this awful disease that will directly affect one in two men and one in three women in their lifetimes,” said Stand Up To Cancer co-founder Sue Schwartz. “We couldn’t carry out our mission to accelerate the pace of research and deliver new treatments quickly without the support we receive from consumers and collaborators like MasterCard and MLB. It’s a cause that unites us all.”

“By aligning with a cause that people are passionate about and delivering a program that leverages activities they’re already planning – the simple act of dining out – we’re able to drive significant funds to help further critical cancer research initiatives,”  said Group Executive, U.S. Marketing, Cheryl Guerin. “We’re now three years in to our engagement with Stand Up To Cancer and every time we wrap a program like this we are astonished at the outpouring of support from our cardholders, issuers and restaurant industry partners. It’s something we can all feel good about being a part of.”

The Quest to Do Good Continues
Over the past three years, MasterCard has contributed over $20 million to SU2C’s efforts to raise funds for research and to help make everyone diagnosed with cancer a survivor. For more information about how you can get involved, visit http://www.mastercard.com/dogood.

About MasterCard
MasterCard (NYSE: MA), http://www.mastercard.com, is a technology company in the global payments industry. We operate the world’s fastest payments processing network, connecting consumers, financial institutions, merchants, governments and businesses in more than 210 countries and territories. MasterCard’s products and solutions make everyday commerce activities – such as shopping, traveling, running a business and managing finances – easier, more secure and more efficient for everyone. Follow us on Twitter @MasterCardNews, join the discussion on the Cashless Pioneers Blog and subscribe for the latest news on the Engagement Bureau.

About Stand Up To Cancer
Stand Up To Cancer (SU2C) raises funds to accelerate the pace of research to get new therapies to patients quickly and save lives now. SU2C, a program of the Entertainment Industry Foundation (EIF), a 501(c)(3) charitable organization, was established in 2008 by film and media leaders who utilize the industry’s resources to engage the public in supporting a new, collaborative model of cancer research, and to increase awareness about progress being made in the fight against the disease. As SU2C’s scientific partner, the American Association for Cancer Research (AACR) and a Scientific Advisory Committee led by Nobel Laureate Phillip A. Sharp, Ph.D., conduct rigorous, competitive review processes to identify the best research proposals to recommend for funding, oversee grants administration, and provide expert review of research progress.