MasterCard launches Dig In & Do Good to support SU2C 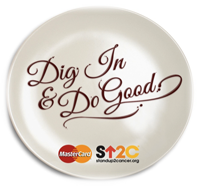 Purchase, NY and Los Angeles, CA (July 12, 2013) – MasterCard Worldwide and Stand Up To Cancer are once again coming together to give dining out a purpose through “Dig In and Do Good.” Beginning today, every time cardholders spend $10 or more when dining out, or ordering in, and choose to pay with their MasterCard through September 28, 2013, MasterCard will make a donation to Stand Up To Cancer one precious cent at a time, up to a total of $4MM.

This year’s “Dig In and Do Good” campaign will include a cause marketing television spot featuring Stand Up To Cancer ambassador, two-time Emmy-winning actor Eric Stonestreet. Stonestreet is known for his role as Cameron Tucker on the ABC comedy Modern Family.

“Like most people, cancer has personally affected my life.  My mother is a two-time survivor and unfortunately more of my family and friends have been touched by this tragic disease.  That’s why I am honored to support Stand Up To Cancer and their collaboration with MasterCard’s ‘Dig In and Do Good’ campaign,” said Eric Stonestreet.  “Together, we can make a difference in the fight against cancer.”

“Through the Dig In and Do Good campaign, raising funds for cancer research is as easy as eating lunch with your colleagues or having dinner with your family,” said Stand Up To Cancer co-founder and CFA member Rusty Robertson.  “We are so incredibly grateful for MasterCard’s continuing commitment to help eradicate this disease.”

“The ‘Dig In and Do Good’ program gives our cardholders a simple way to stand up to cancer every time they sit down for a meal and join us in support of a cause that is personal for so many of us,” said Alfredo Gangotena, Chief Marketing Officer, MasterCard. “It’s an extension of our commitment to give our cardholders meaningful and unique ways to make a difference while going about their daily lives and doing the things they enjoy.”

A Star-Studded Kick Off
MasterCard’ kicked off the “Dig In and Do Good” campaign last night at New York City’s MLB Fan Cave with an evening charity event hosted and curated by Chef Marcus Samuelsson. Joined by SU2C leadership, scientists, doctors and ambassadors, MasterCard and Stand Up To Cancer celebrated the launch toward reaching our $4MM fundraising goal.

With the help of MLB mascots Mr. Met & the Philly Phanatic, a ceremonial ‘Dig In & Do Good’ swipe will debut during the 2013 All-Star Game Home Run Derby and will air during the broadcast on ESPN along with a rivals breaking bread: 30 spot. They will re-run in MLB stadiums across the country throughout the baseball season.

#DoGood and Help Spread the Word
To support the initiative, MasterCard is encouraging consumers to join the movement and help spread the word by:

• Sharing Socially/Booking A Table: Consumers can get their friends, family and co-workers involved in MasterCard’s support of Stand Up To Cancer by sharing their commitment to join the effort across their personal social media channels and/or making a restaurant reservation via mastercard.com/dogood and inviting friends on Facebook or LinkedIn to dine out with them.

• Checking In When Eating Out: MasterCard and Foursquare have partnered to remind people when they check into restaurants and dining establishments that when they pay with MasterCard they’re helping to support Stand Up To Cancer.

• Enabling Direct Donations: MasterCard and Chirpify are partnering to offer the first ever in-stream hashtag donation campaign.  Consumers will be able to donate with their MasterCard card directly to Stand Up To Cancer via Twitter, Facebook and Instagram, enabled by Chirpify.
The collaborative campaign represents MasterCard’s continued dedication to cancer research. To date, MasterCard collaborations with SU2C have raised more than $12 million for the cause. The donations driven by MasterCard’s generous cardholders have helped provide support to Stand Up To Cancer and the translational cancer research it funds.

MasterCard, the MasterCard Brand Mark, PayPass and Priceless are registered trademarks and Dig In & Do Good is a trademark of MasterCard International Incorporated. ©2013 MasterCard.

About MasterCard
MasterCard (NYSE: MA), www.mastercard.com, is a technology company in the global payments industry. We operate the world’s fastest payments processing network, connecting consumers, financial institutions, merchants, governments and businesses in more than 210 countries and territories. MasterCard’s products and solutions make everyday commerce activities – such as shopping, traveling, running a business and managing finances – easier, more secure and more efficient for everyone. Follow us on Twitter @MasterCardNews, join the discussion on the Cashless Conversations Blog and subscribe for the latest news.

About Stand Up To Cancer
Stand Up To Cancer (SU2C), a program of the Entertainment Industry Foundation (EIF), a 501(c)(3) charitable organization, and was established in 2008 by film and media leaders who utilize the industry’s resources to engage the public in supporting a new, collaborative model of cancer research, and to increase awareness about progress being made in the fight against the disease. SU2C raises funds to accelerate the pace of research that will get new therapies to patients quickly and save lives now. As SU2C’s scientific partner, the American Association for Cancer Research (AACR) and a Scientific Advisory Committee led by Nobel Laureate Phillip A. Sharp, Ph.D., conduct rigorous, competitive review processes to identify the best research proposals to recommend receiving funding, oversee grants administration, and provide expert review of research progress.

Current members of the SU2C Council of Founders and Advisors (CFA) include Talk Show Host, Journalist and well-known Cancer Advocate Katie Couric; Sherry Lansing, Chairperson of the Entertainment Industry Foundation’s Board of Directors and Founder of the Sherry Lansing Foundation; EIF President and CEO Lisa Paulsen; EIF Senior Vice President Kathleen Lobb; Rusty Robertson and Sue Schwartz of the Robertson Schwartz Agency; Pamela Oas Williams, President of Laura Ziskin Productions and Executive Producer of Stand Up To Cancer’s In-house Production Team, and Nonprofit Executive Ellen Ziffren. All current members of the CFA were co-producers of the 2012 televised special. The late co-founder Laura Ziskin executive produced both the Sept. 5, 2008, and Sept. 10, 2010, broadcasts. SU2C was formally launched on May 27, 2008. Sung Poblete, Ph.D., R.N., has served as SU2C’s president and CEO since 2011.